Origami is one of the fascinating artwork.I personally like it very much. I named it “paper magic”. When you make tiny origami charms and give them to kids they see you like magicians. They get blown out in their heads by the fact you turned a flat paper into some 3D origami art. And they either start pestering you to make them more pieces like that or teach them t make one. With any paper we can make any kinds of origami anywhere in matter of minutes and thats the beautiful thing about it. There are zillions of origami tutorials our there. Making origami pieces is more fun even better is putting them use in your functional crafts. Like using them as show piece, using them to wrap your gifts, make wall hangings etc etc. I preferred to use them in greeting cards. 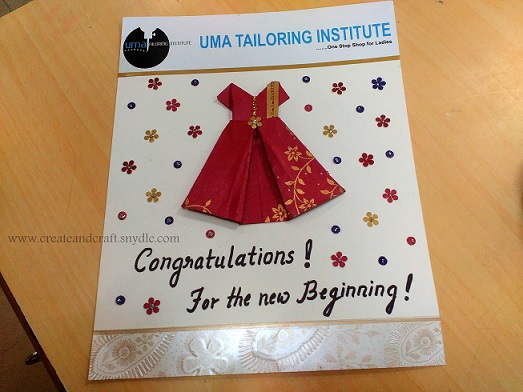 I had this idea at the back of my head until I had this need of making one  greeting card for my aunt. It was not her birthday or anniversary, she was going to open a tailoring Institute cum dress shop. As soon as I received her Invitation I wanted to congratulate her on the new step She is the first lady entrepreneur in our family and I was proud of her. So I wanted to make her a congratulations card thats when the Idea which was sleeping in my head popped out. Why not use origami in this card I have seen plenty of garment origamis like shirt skirt baby dress etc So I choose to make Frock out of paper using origami and use it as a center piece for my greeting card. A dress on the greeting card will be most appropriate for the dress shop and all fit into place. So I searched and found out this  video in youtube.

Link for video tutorial on how to make a paper dress

This paper dress was amazing I made it with some old wedding invitation card. Nowadays the wedding invitation or whatever invitations they are too pretty to be thrown out once the event was over. I had this crazy habit of collecting and storing interesting invitation cards. In almost all the invitation cards I find something interesting be it the paper the colour or the texture or the fonts or the die cut designs anything that fascinates me I store it and I do use them in all my cards Most of them I used to make bookmarks. One side of the invitations will be blank and plain usually thats where I make my presence I use them as base for my quilling crafts paintings pencil drawings anything. Ok lets come back to the origami greeting card we were making. So as I was telling I made this pretty origami dress with one of the beautiful cardstock I got from my cousin’s wedding Invitation and then used it to make the greeting card